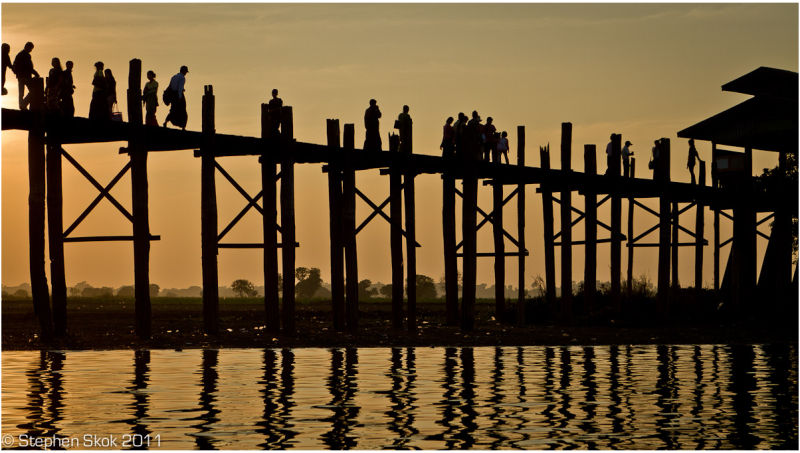 U Bein's Bridge, at Amarapura, a little way out of Mandalay in Burma; more like suburb due to urban sprawl.

This is a 1.2 km teak wood footbridge, the longest in the world, so 'they' say. Apparently it was built by the mayor U Bein who salvaged the unwanted teak columns from the old palace during the move to Mandalay, round about 1849. Other stories prevail.

Hope you like the series - shot from a moving boat during golden hour & sunset on a Tuesday in January 2011.

fantastic compo and work on this image .

Such a striking image....out of another world. I'll remember this one and return to it.

@Susan: It was a great experience, out on the lake shooting and taking in this bridge. If ever you go to Burma, visiting U Bein's bridge at golden hour is an absolute must. I suggest going out on boat several times, and perhaps one of those times should be without a camera. (?)

Another great shot! I like the reflection in the water.

Really great image!! I enjoyed looking at your smugmug gallery. I am just deciding if I will choose them as a host.

@myky: Hi Myky, sorry it took so long to get back to you. I do recommend the good folks at SmugMug. Bee with them for years. I'm in the process of preparing some major uploads.